Portuguese Empire (1415-1999) Great surfspots!
http://en.m.wikipedia.org/wiki/Portuguese_Empire
Posted by Colonial Surfer at 4:20 AM No comments:

Surfing The Nations are surfing Israel. Israel are surfing the world while bombing Palestine. 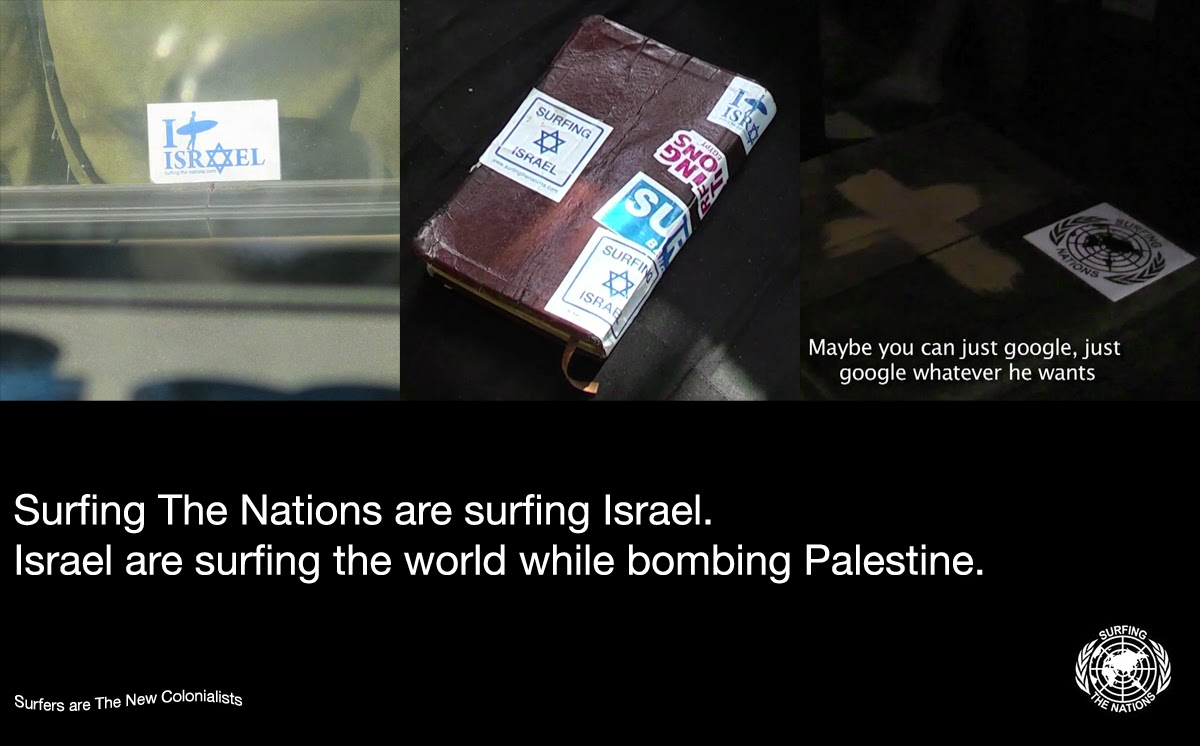 Posted by Colonial Surfer at 6:53 PM No comments:

What do Adolf Hitler & Surfers have in common?

Surfing is a sport lead by and dominated by people within a privileged minority. The mainstream representation of a surfer is a white, rich and privileged man. Today surfers from former colonial powers and rich countries are surfing in the areas that used to be their colonies. 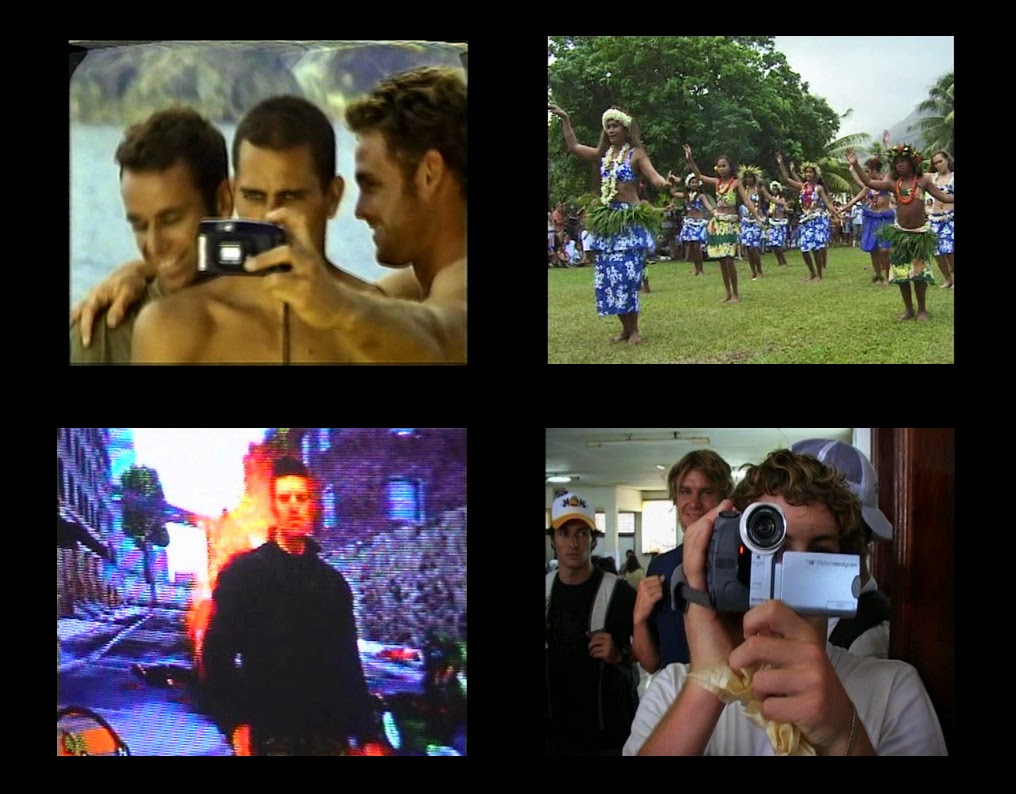 Some years ago I made a surf video that was showing at an art gallery. The video was built up by material from already existing mainstream contemporary surf movies. As a postproduction work I was editing those videos into a result that was showing everything from those flicks except the surfing and the waves. Left was something like a lifestyle material. This was made up mostly of portraits of surfers, surrounding landscapes and spectacular exotic images from different countries and cultures. Since surfing as an activity is taken away from the production it feels a bit abrasive. Through the concentrated form in the film, you get an idea about how this picture material is political.

The references I got from art critics was that it looked very similar to Leni Riefenstahls Triumph des Willens. I got told that the material was very much like the propaganda for Adolf Hitler and the Aryan race.

Cause if you deconstruct and analyze the filmed material from a typical surf video you get to understand that it is very similar in language as the propaganda used by the Nazis. A lot of photographs and filmed sequences from Leni Riefenstahl has the similar picture language as well. This was Adolf Hitlers favorite photographer.

Posted by Colonial Surfer at 7:01 AM No comments:

The guys in this video might not be surfers, but they are somehow surfing the world. The pictures in the music video are from a volunteer trip.


The volunteers are acting something out, while the locals are getting pictured in poor situations. The main characters in the video are presented as playful and without any big worries. They are leading something as a story while the ”others” are passive.

One of the volunteer guys is carrying around balloons and give them away to people. This is like a tragic joke. Or maybe a clever visualization by how this is not about helping at all.

Cause if you look on the structures here. The volunteers are privileged and rich. The work they do here in this area won’t change anything really. The only thing you get out of this is that the wealthy volunteers are framing themselves as ideal, happy and fortunate.
Posted by Colonial Surfer at 11:37 PM No comments:

The movies, pictures, commercials, and beaches of surfing are full of well-trained male bodies. It's also common with male nude torsos that meet in grabbing arms and encouraging hugs or intimate handshakes. To imagine and view surfing as a homoerotic culture is easy since it's mostly about men who socialize primarily with other men. 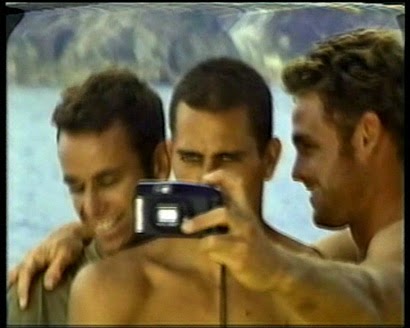 It's obvious that contemporary surfing is a sport that is dominated and leads by a larger number of white men. And there are clear differences in how men and women do get represented in pictures. If you do an Internet search for images on the word surfer, and then categorize them, the point is clear.
In the photos of male surfers, which are the most, there is a lot more focus on performance, muscles and the activity. For sure there are also some women heroines in this sport. For example female surfers deep in tubes on large massive waves such as legendary Teahupoo in Tahiti. There are a lot of really great women surfers. But the most of the pictures on girls do rather focus in other ways.

In the surf-films that are produced for inspiration (porn), there are sometimes sequences of women that get cut in during ongoing movie streams of male heroic surfers and their bodies in ongoing activities. A focus on how those women are surfing waves is rare. Instead, it is quite common with images that are filmed in secret from spying perspectives. Images that often are zoom views on girls breast and butts in bikinis.
And this is an ugly abuse since those girls get filmed when they have no clue that they are getting captured, or know about their upcoming appearance in those films. Images that are edited into the screenplay in such a rude way that you do get to wonder about how things are? What is this really about? Although these images are highly doubtful and wrong to spread further they are in movies sponsored by large multinational surf companies.

- Look at us! We are surfers bonding with other guys, but we are definitely heterosexual men. Don’t think about us as gays. Cause we do have evidence!

Another speaking example in the same line is the far-reaching campaign that has been going on for several years by the shoe and clothing brand reef. In the marketing, they have been sending out large quantities of powerful images on male surfers in spectacular or ideal positions on great waves. In those commercial pics there are edited images of girls next to the men. In those pictures, the surfers names and autographs are written in proud ways. And the women's names are written as well. But the only thing we see of the women is their backside. They don’t even twist their head so we can see their eyes or faces. Present in the images is their butts. Pictures of fit shaped naked asses. Alongside with the men on the waves, this is the women performance.

The title of this post is: Surfers are queer. When I say queer I refer to a queer theoretical perspective on identity and gender that somehow explains that those roles are made up of constructions. For example in such a way as the famous theorist Judith Butler is focusing on sexuality as a cultural construction. This is then in a perspective on how our gender-roles relate to each other in forming (performative) matters. The surfing culture and its roles are created by how individuals mimic and imitate each other, as well as how surfers get influenced by the sport's repeating commercials, marketing and else.

A queer theory perspective is about that identity and gender is an act that has to be rehearsed, much like a script, and we as the surfers/actors make this script a reality over and over again by performing these actions. From this point of view, with a focus on those parameters, you can clearly say that the surf-culture, in repetition and by how it is constructed in obvious ways is something that is about acting.

“Life does not come with a script, so quit acting.”; is written as a tagline on a surfers twitter account STNC follows. The point in this text is rather that life certainly comes with scripts. Those scripts are sometimes forced into our behavior by ideals and social norms. I would like to say that it is rather about changing those scripts for how we play than stop playing. Since we are all playing and there is no essential true way.

A good change for the surf culture would be about creating room for a greater diversity and generate a more inclusive, welcoming and equal culture. Right now the surf culture is a dominant, strongly normative, heteronormative and a white male culture. This is a very narrow construction.
Posted by Colonial Surfer at 11:53 AM No comments:

Tweets by @Colonial_Surfer
Posted by Colonial Surfer at 3:25 PM No comments:

"SAVE THE NIGGER BALL" ? 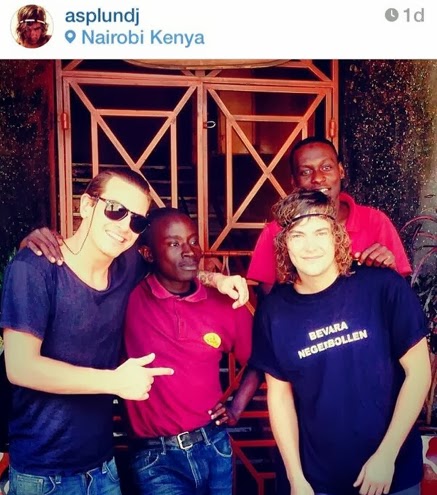 The picture to the left is from Nairobi Kenya and was posted on instagram by the user asplundj. It brought up an immense amount of reactions on twitter a few days ago. This was because people considered it as a racist act and photo. The two white guys in the picture are from Sweden. Johan Asplund, which is to the right in the picture, is wearing a t-shirt with the text: BEVARA NEGERBOLLEN. Translated into English it means literally: SAVE THE NIGGER BALL. And the word negerboll (nigger ball/negro ball) has earlier been used as the common name for a Swedish dessert and sweet that is balls made on cacao as one of the ingredients. These guys demonstrate through the t-shirt in the picture that they are fighting for the right to be allowed to "continue" to say, and name this dessert, negro/nigger balls.
But why do they fight for such a thing? What does it really benefit the world if those two privileged guys are allowed (which they already are in a way) to express themselves with words that by others can be perceived as insulting, offensive and racist. Chocolate ball (chokladboll) is a more appropriate name and common in Sweden today. 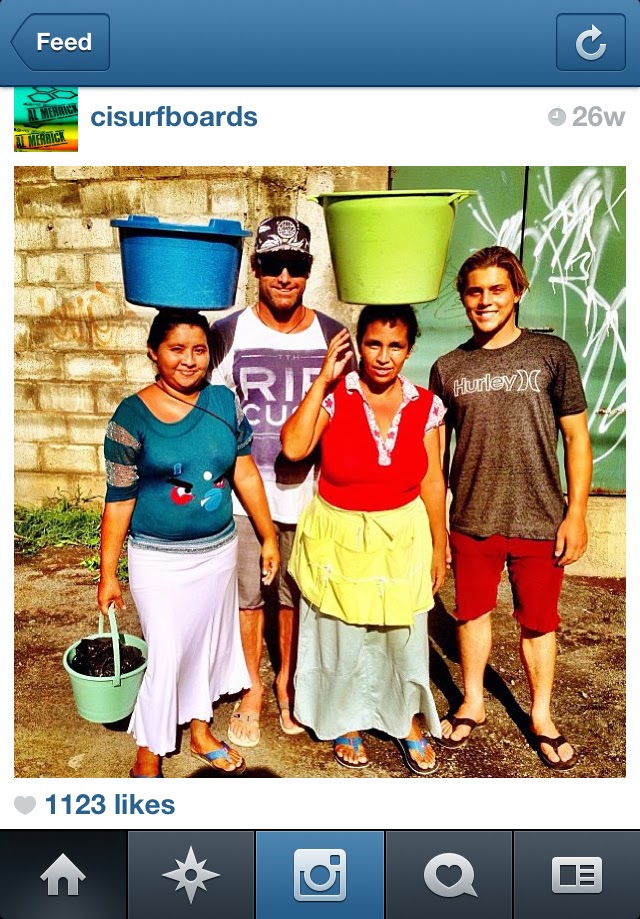 In the picture to the right two professional surfers, Taylor Knox and Conner Coffin, are posing along with two women. The women in the picture are present without any names. And these women do not act independent in the picture as strong and free individual identities. The key reason for these women's presence in the image is that they carry heavy water on their heads and that they look exotic. These women do not get their own space for maneuver in identity by the picture. The surf company on the other hand, that is behind the Instagram profile, and the two surfers, do benefit. Cause on a level about identity they are somehow consuming these two women and the surrounding environment. The company and the surfers are strengthening their roles as free traveling nomads, while the ladies are depicted as exotic stereotypes. To read from the guy faces there is something humorous about the picture. But what does that humor relate to? 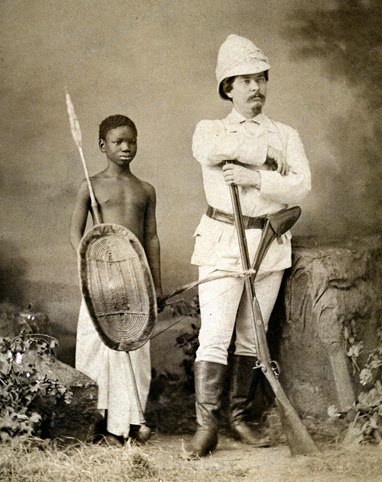 The problems with all these images are the same. They are part of a racist structure where hierarchies come into play and organize the world into power positions and already fixed roles. These problematic structures are abundantly present in our contemporary world and take part in how stories are being told. This is something important to break for a more equal world order. And it is about changing the history, or at least the future, since this is something that relates all the way back to ancient colonialism.

Posted by Colonial Surfer at 2:14 PM No comments: